Amphibian Stocks on the Rise 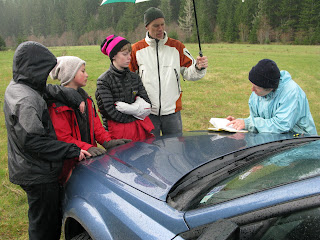 For the eighth year, our small – but brave – core team completed the annual round of amphibian monitoring on April 2nd. We were heartened to find an expansion of species into new areas and strong populations in our main wetlands. The species we have been most excited to see surviving and expanding is the red legged frog. Along with having snow showers for the second year – we enjoyed having Andy and Henry Stevens, and friends, join us once again. Special thanks to Char Corkran for her enthusiasm, skill, and commitment.
The eight years of data are compiled in a handy spread sheet; if you’d like a copy, let us know.