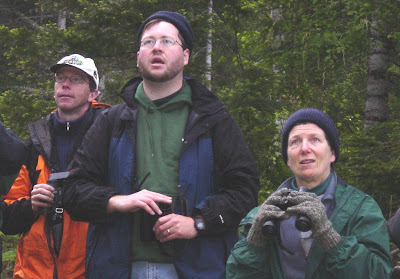 The annual three rounds of bird counts have gotten off to a good start. After three years of monitoring in the Manning Forest, we have shifted to the Timber Forest. On a cold, clear, and crisp May 13th morning, Steve Engel, Char Corkran, and Pam completed the first count. The numbers of birds were high and they were pleased to count a solid number of birds associated with more complex forests.
The second count, on May 20th, had to be cancelled due to rain. Instead of doing an official count, we did an educational bird walk along the same route with Lori Hennings, Char Corkran, Ken Chamberlain, and Molly, Pam, and Peter Hayes. Hoping for better weather for the final count next week.