Snow on the Amphibians 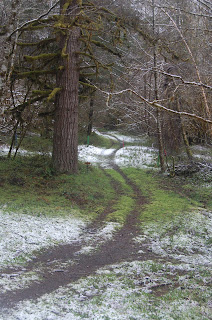 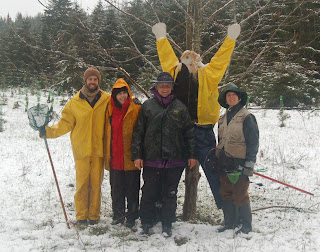 As a reminder that the weather gods don’t seem to care when it is time for the scheduled monitoring, five brave souls completed the annual round of aquatic amphibian monitoring on a snowy April 3rd. Our visits to one site at Manning, three at Timber, and four at Mt. Richmond showed us that amphibian populations are doing generally well and that at risk species, such as red legged frogs, continue to breed in several of our ponds – both human made and natural. It was clear that a spring that got an early start had been put on hold by unseasonably cold weather. Stay tuned for a more complete report from our leader, Char Corkran. The game participants were Marc, Rebecca, and Laurent Carrel, plus Char and Peter.
——————————
UPDATE – April, 2010
Char Corkran, Northwest Ecological Research Institute

The annual quick check of ponds on the 3 forests was a bit hampered by weather – namely 3” of snow at Timber as well as high water and low visibility at all the sites. Nevertheless, we could determine that most of the same amphibian species are continuing to do quite well at the ponds. We conducted our usual visual count from around the entire perimeter of each of the small open ponds, plus capturing a few larvae with nets. The deepest sections of the larger ponds were not possible to survey this year. And as usual, in the Beaver Pond at Mt. Richmond amphibians could only be haphazardly sampled rather than counted because of the complexity of vegetation. It’s a jungle of dense aquatic plants, emergent willows bushing out after beaver nibbling, and ash trees that have tipped and then sprouted new branches from half-submerged logs. Hard for surveyors but heaven for frogs and salamanders.

Northwestern Salamander egg masses were present in all but one of the ponds where we have ever found them. In fact, we broke the old record in Mrs. Patrick’s Pond at Timber with a whopping 53 egg masses and 12 yearling larvae. Rough-skinned Newts were not seen in quite such numbers in quite so many ponds, which may be allowing the other species to do better. It was just too cold for any frogs to be active. We only saw a couple of Pacific Treefrog egg masses, but we may well have missed some and there’s plenty of time for more to be laid. Red-legged Frogs had probably laid eggs in the warm weather in January or February. We netted a few tadpoles at the Beaver Pond at Mt. Richmond, but could not tell if there were any in the Field Pond at Timber. We did not search under the snow for terrestrial salamanders. No reptiles were silly enough to be out, and we did not check the famous Blue Tarp.

At Timber, the Hayes had some work done at the Field Pond to create more shallows. With the development of vegetation that is occurring there, this pond should become really good habitat for Red-legged Frog. We need to get out there and borrow a few sedges from Mrs. Patrick’s Pond for transplanting to the new shallows. At Mt. Richmond, work to suppress invasive Reed Canarygrass and Himalayan Blackberry around Bear Pear Pond is impressive already and will continue.

Every survey at Hyla Woods always ends with excitement to add still more surveys! It would be good to go back later this spring to some of the small ponds where deer or somebody else had stirred up the mud and prevented our seeing the amphibians. More importantly, each year we should probably go out to Mt. Richmond on a good weather day in February or early March to try for a count of Red-legged Frog egg masses in the Beaver Pond.